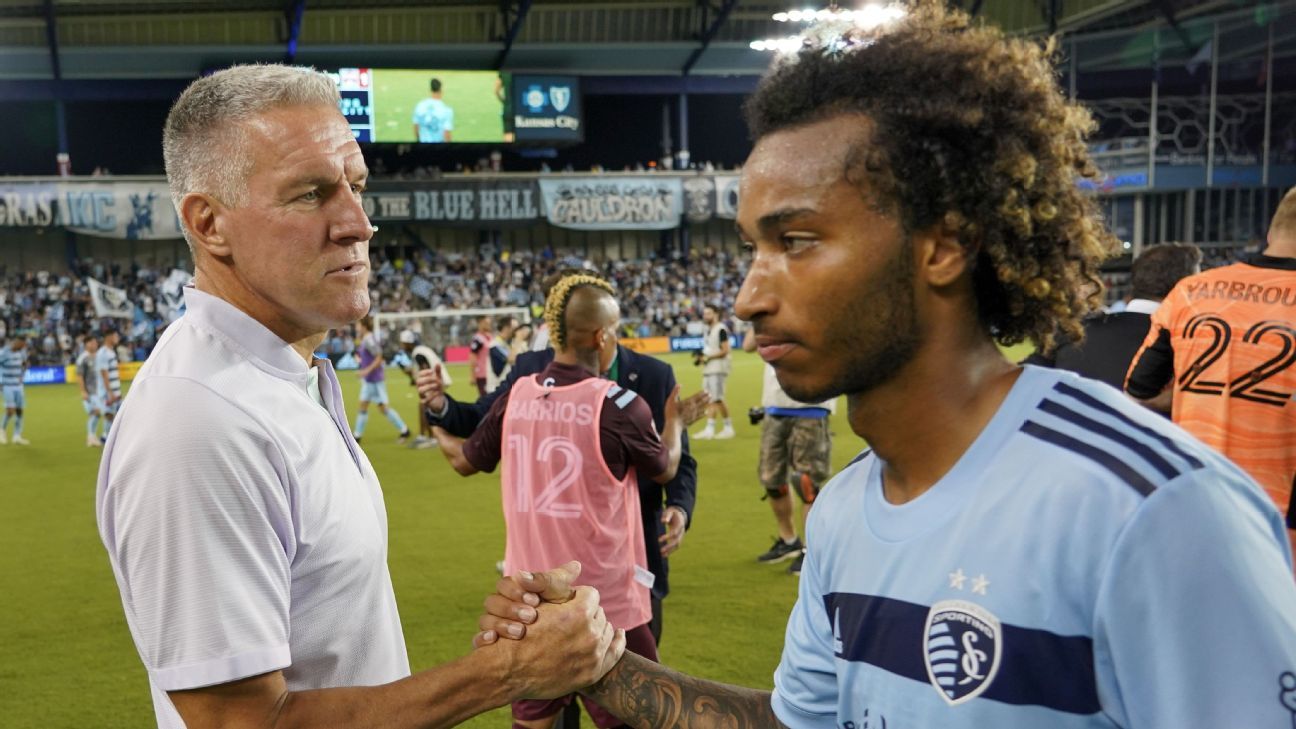 First it was . Then it was . Now it's . Three homegrown players from (two of whom, Tessmann and Busio, are teenagers) are leaving their clubs midseason for the brighter lights of European football. Tessmann and Busio are moving to , newly promoted to 's Serie A, and Vines is headed to Royal Antwerp in 's first division.

These are novel moves in MLS. The biggest leagues across the Atlantic Ocean taking an interest in players from the and is a trend that's continued since and broke out in the Bundesliga in 2016 and 2017, respectively. But in so many cases -- , and in the past year alone -- those deals have come together during the MLS offseason, rather than in the middle of the campaign, when Europe's summer transfer window is open.

"Strong European markets are now targeting American players, so this is going to happen more and more, as you are seeing with the players that Philadelphia sold (Aaronson and McKenzie) ... and now we see , Sam Vines, , Busio," FC Dallas technical director Andre Zanotta told ESPN. "I believe this will happen more and more, and clubs will have to be ready -- and this is my role -- for when this moment comes."

Not that long ago, MLS had something of a reputation for stubbornly holding on to players who were ready to take the next step in their careers -- 's fractious exit from comes to mind, as does Fabian Castillo leaving FC Dallas for Trabzonspor. That stance has shifted somewhat in the past three years, with MLS embracing its role as something of a developmental league in the global soccer market, but clubs are still reluctant to part with star players ahead of the unpredictability of the MLS Cup playoffs.

That, too, is changing.

left for in last September, two months before the postseason kicked off. In August 2019, Chris Durkin joined Belgian outfit Sint-Truiden from on loan before making the switch permanent a year later, and moved to Norwegian club Molde from .

After just three Homegrown players left MLS midseason for opportunities in Europe between 2015 and 2020, three have done it in the past year alone -- and there are reports that 18-year-old striker of Dallas (linked to ) and the ' 20-year-old midfielder (linked to clubs in the Netherlands and Portugal) could be next in line.

More and more, as Zanotta noted, clubs will face the conundrum of balancing their competitive nature (the quest for MLS Cup) with an increasingly prevalent philosophy of developing talented young players and allowing them to take the next step in their careers at higher levels.

"The real tough thing is... being able to maintain a competitiveness within your group, but still also being able to develop and sell players," manager and sporting director Peter Vermes said to ESPN. "Frankly, it's not very easy."

There are a number of off-the-field considerations when clubs make these decisions. Would a star's departure derail a run in the MLS Cup playoffs? How much revenue would be lost by a lack of postseason home games? What sort of message does would a move send to the fans in terms of the team's ambition? Ultimately, though, the two questions front offices around the league ask themselves when faced with this situation: Do we have enough depth to manage without him and, perhaps most crucially, what does the player want?

The former question is fairly straightforward. Zanotta detailed Dallas' decision-making in the past two years, saying that the emergence of Bryan Reynolds (who's since moved to ) made the club feel confident they could lose Cannon last season without seeing a significant drop in performances at right-back, and noting his team's midfield depth covering any holes left by Tessmann's Italian adventure this term.

The latter question, though, contains several shades of gray.

"I believe nine out of 10 players, at least, they dream to play in the top European leagues," Zanotta said. "Sometimes you may think, 'Well, that's one opportunity, there's another that will come,' but I've seen many times that it doesn't happen ... and then there is a frustration on the player's side."

Added Vermes: "You're going to have players that think, 'Hey, you know what, I'm really interested in playing for Sporting Kansas City, and one day I may want to play in Europe.' It's not for me to tell the player, 'hey, you have to stay here for the rest of your career,' it's for me to understand there's a possibility that could happen and I just need to make sure that I'm... prepared with a succession plan.

"I don't think it's philosophically a good thing to know that a player has an ambition to move on to Europe or somewhere else, and then you're not willing to [allow them to leave] as a club. I think that's the wrong philosophy, personally speaking. I'm not criticizing other clubs, I just think for us, it would be the wrong thing to do. I want guys who want to be here, and I also think it's part of our responsibility to help guys reach their ambition."

As difficult and as increasingly common as these questions are, though, Vermes sees them as the kind of conundrums MLS front offices have been eager to solve for much of the league's existence. He pointed to the success of the USMNT at this summer's Gold Cup, with 13 players of the 23-man squad having spent some formative time in an MLS academy. In Vermes' eyes, it's evidence that the player-development path in the U.S. and Canada is working. And that there's more to come.

"If you look at the history of clubs like and and , their academies have been in place for 50 years," he said. "We're just touching that time period. The fact that we're now able to produce high-quality international players is a great result in saying to all of us, 'Hey, you guys are on the right track.' Now, we still have a lot of work to do, we can be so much better in so many different areas, but we're moving in the right direction and I think that part is tremendous.

"To me, this is the time when you double down."

Coutinho tops list of players who need to move before deadline

On a pitch that didn't offer much for the bowlers, West Indies did well to not let...

The left-armer is hoping to get three or four spells under his belt during the two-day...

India went down by five wickets in the second T20I after another poor performance...

Serena herself has repeatedly admitted to having invested her money in various companies...

'It's a different intensity that Roger Federer brings',...

On this day: Roger Federer loses Brisbane final to Lleyton...

Tennis - Hewitt defeated Federer on January 5, 2014 for the first home title since...