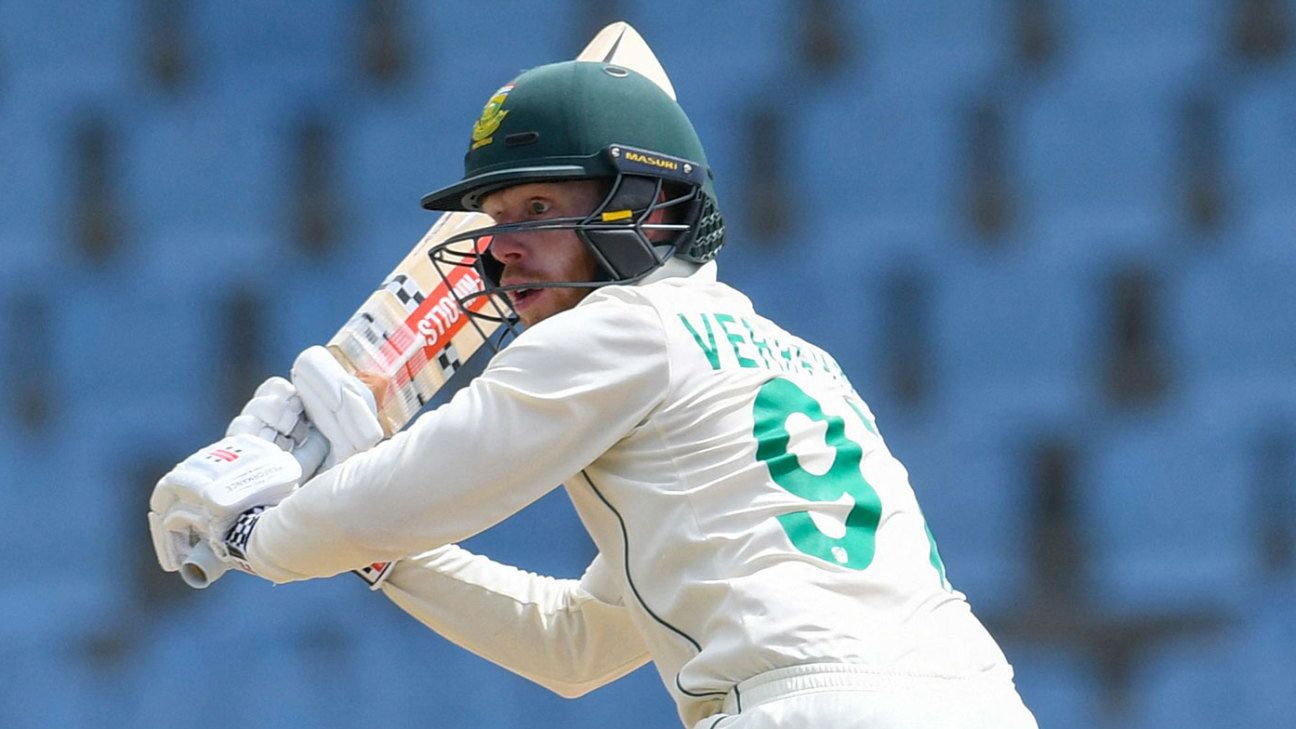 In just his second Test, Verryenne was grateful to have Dean Elgar alongside him when South Africa were in early trouble

"Stay boring," was the advice gave to as the pair navigated a disciplined West Indies attack in seamer-friendly conditions on the opening day in St Lucia.

Playing in just his second Test match, Verryenne found himself at the crease with South Africa 37 for 3, the ball swinging and the home attack on the hunt. He joined his captain Elgar, who had battled through 52 balls for 16 runs, playing and missing aplenty, and was instructed to buckle up and stay put.

"[He told me] with the conditions being difficult, you don't want to focus too much on scoring runs; it's all about spending time in the middle." Verreynne said. "The messages from him were about reminding me to stay patient, stick to the processes, remember the chats we had in the week, don't do anything different, stay boring and spend time out in the middle."

It took Verreynne 13 balls to score his first run and 24 before his first boundary. By the time he got to 10, he had faced 55 balls. Things became a little easier as the afternoon wore on, and his next 17 runs came in 33 balls, but it was still tough going.

"There was quite a lot of rain around yesterday as well so the wicket didn't see any sunlight and it was a bit tacky in the morning. With the overcast conditions, there was quite a bit of swing about," he said. "And then after lunch, the wicket started firming up and it was moving a bit quicker off the wicket. They have got a really skilful bowling line-up and they are very good at using the Dukes ball to their advantage. They made scoring quite tricky."

For a player known for his aggression and ability to progress the game quickly, it was an exercise in self-denial which Verreynne had been working on in the week leading up to this match.

"I am quite a free-scoring player, but I found out in the first Test it's probably not the way to go on this wicket," he said. "I have been working a lot this week on adjusting to these conditions and putting certain shots away that I am used to playing. It was really nice to have Dean there to remind me of those chats and the net sessions I've had where I have had to restrict myself."

Though Verreynne knew he had traveled to the Caribbean as the back-up batter, with vice-captain Temba Bavuma carrying a hip injury into the tour, he prepared for the first Test as though he would play, and he did. He scored 6 in that match and would likely have been benched if Bavuma recovered in time for this Test.

The WI vs SA series is available in the US . Subscribe and tune in to the match.

But Bavuma dislocated a finger in training and Verreynne found out on the afternoon the day before the match that he would be given another chance. The coach said, "You're in. Enjoy it."

He has, though maybe not in the way he imagined he would. Like so many players before him, Verreynne described international cricket as a big step up from what he is used to domestically.

"What I found in this Test series is that you don't really get a break. Sometimes in domestic cricket, you can go through periods where you've got to get through a five-over spell of really ruthless cricket back home and once you get through that, you can play freely. But here, it's the whole day," he said. "The bowlers don't really take their foot off the pedal. You've got to be on it every single ball otherwise you are going to get found out."

He was. A few balls before tea Verreynne tried to pull Shannon Gabriel but edged as the ball swung away to the leg side and was caught behind. He finished on 27. But his partnership with Elgar was worth 87, the highest of the innings so far, proving that there are occasions when boring works best.

Pakistan cricket is a powerhouse: Ronchi

Franchises to have additional INR 3 crore to spend in addition to the balance in...

Babar Azam is best suited to lead the team by example:...

Babar Azam is best suited to lead the team by example: Misbahul Haq

Nathan Lyon faces a winter at home for the first time in...

The offspinner won't head to Hampshire in the off-season but still holds out hope...