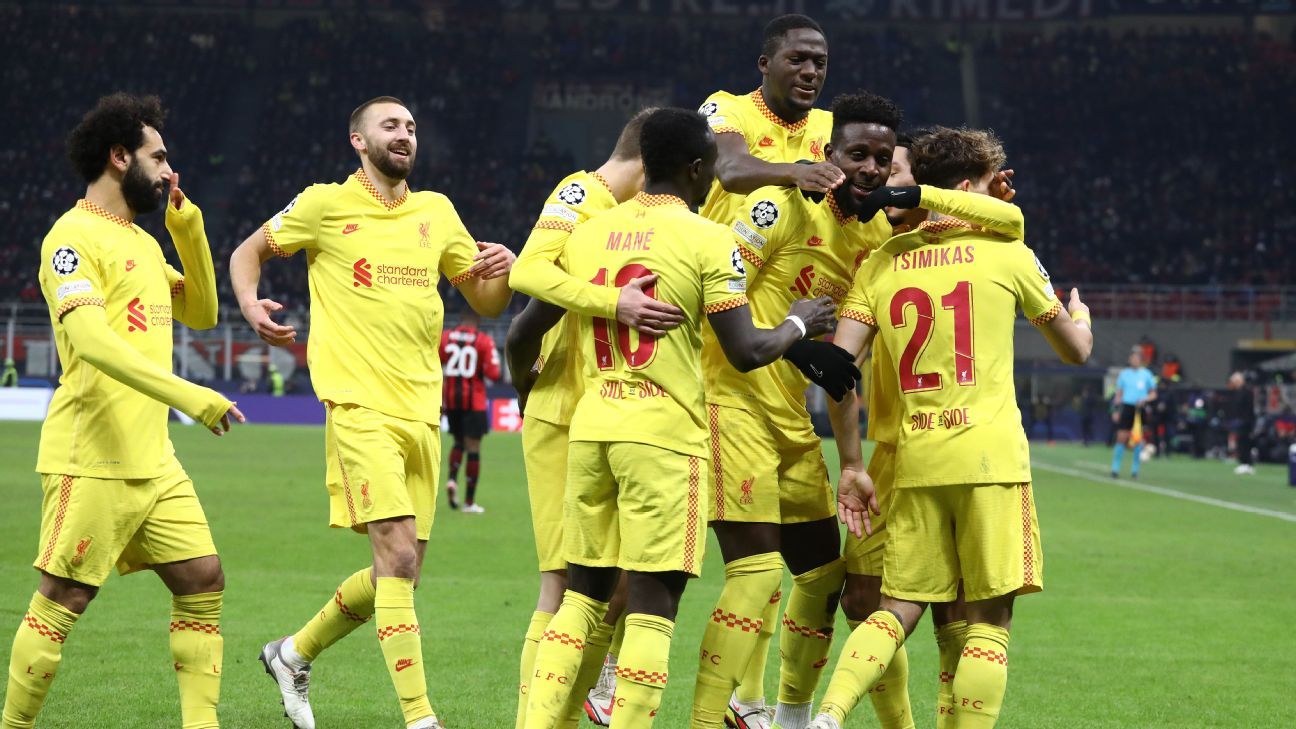 Liverpool players celebrate after scoring a goal against AC Milan in the Champions League. Getty

beat 2-1 in the Champions League on Tuesday night at the San Siro to send the Serie A side out of European competition for the remainder of the season.

opened the scoring for the home side in the right before the 30-minute mark when he side-footed a shot home after Liverpool keeper palmed a corner kick right into his path in front of the net to give Milan a huge first goal.

Liverpool struck back soon after when 's shot was saved but spilled into the path of , who finished with aplomb to level the score ahead of the break.

put Liverpool ahead shortly after the restart when a poor giveaway from the Milan defence sprang into the area and his shot was blocked in the direction of the Belgian, who powered a header past to make it 2-1.

Jurgen Klopp's side remained perfect in UCL group play with six wins from six matches, while Milan finished bottom of the Group B table, with Porto finishing third and headed to the Europa League.

It was also the first time in Liverpool's history that they had chalked up a sixth consecutive victory in the competition.

"What the boys did tonight, I could not be more proud," Klopp said. "The performance was outstanding. Having 21 shots, so many situations where we played outstandingly well and defended passionately and well organised."

With top spot wrapped up before kickoff, Liverpool made eight changes, handing Origi a rare start after his heroics against Wolves.

"We chose that lineup because we wanted to win the game. We needed fresh legs," Klopp explained. "We needed desire to play this game which is difficult in this hectic schedule to always be on fire for the next game."

San Siro erupted after missed a clearance from a corner in the 29th minute, forcing Alisson to parry the ball into Tomori's path for a simple finish.

But just as the home crowd started to believe in an improbable final-day climb into the top two, Salah struck.

Oxlade-Chamberlain's shot was beaten away by goalkeeper Mike Maignan, but the Egyptian reacted quickly to fire home.

Salah became the first Liverpool player to score 20 or more goals in five consecutive seasons since Ian Rush, who did so for six campaigns in a row between 1981 and 1987.

Tomori was then punished when he gave the ball away to Sadio Mane after the break and although the winger's shot was well blocked by Maignan, Origi headed in the rebound.

It was the international's first goal in the Champions League since he scored the second in a 2-0 win in the 2019 final against .

The Rossoneri played with more purpose in the second half but could not find an equaliser, squandering their best chance when he was denied one-on-one by Alisson.

"We wanted to give a joy to our fans but we didn't manage it," disappointed Milan coach Stefano Pioli said. "We have learnt a lot in these six matches."

Information from Reuters was used in this report.

You talk too much: Irfan Pathan recalls verbal spat with...

You talk too much: Irfan Pathan recalls verbal spat with Shoaib Akhtar in 2006

India’s Kohli to continue all-format grind for next three...

Young Novak Djokovic: 'I can beat Rafael Nadal on clay'

Tennis - Novak spoke about his goals on clay after the opening round victory over...

Norman Vanua saves the day to put PNG in final

Mills, Behrendorff and Agar also put in starring roles as Melbourne Renegades are...

Tennis - Wozniacki to meet Serena Williams in Copenhagen on May 18