Shakib: 'The win is a relief for the team' 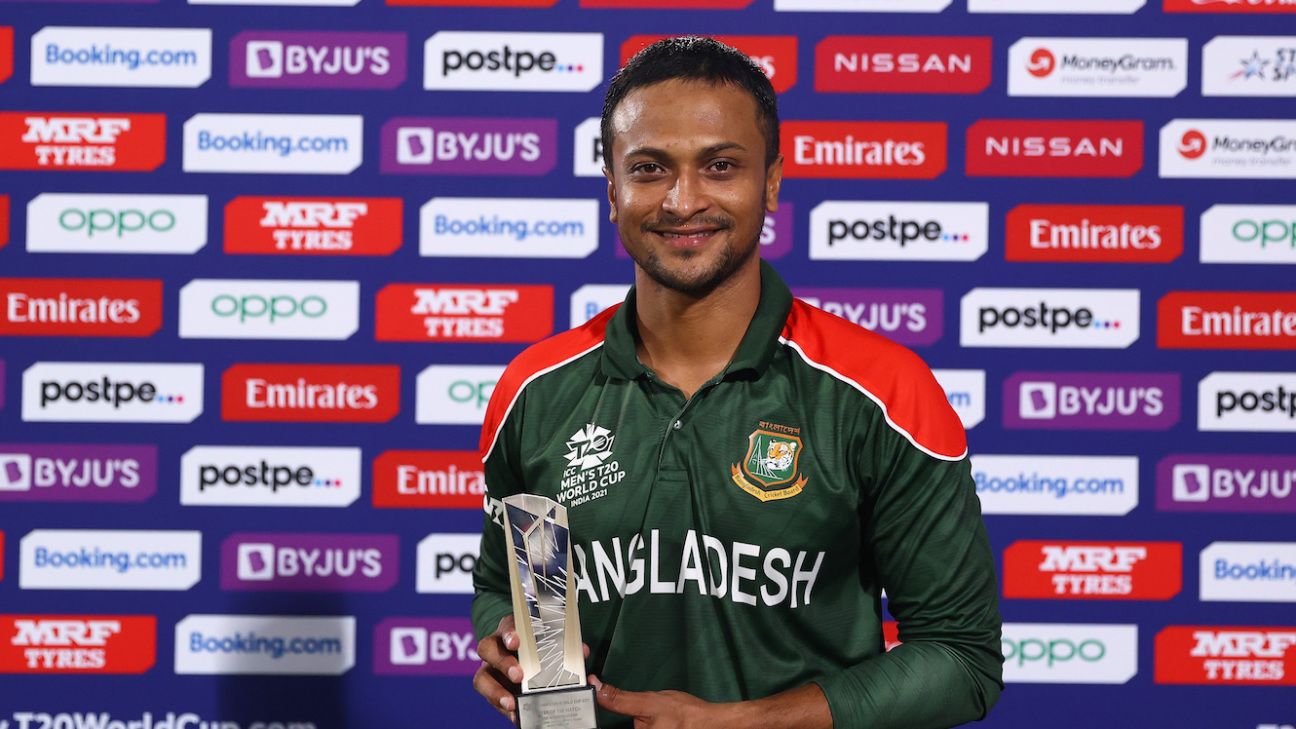 "I think we are capable of improving on this, but we shouldn't be too worried by it."

Bangladesh felt comforted by their 26-run win over Oman on Tuesday but it was a lot of hard work, according to . He said that Bangladesh turned the corner through the spells of Mahedi Hasan and Mohammad Saifuddin while defending 153, but they are still looking to improve in their batting.

"The win is a relief for the team," Shakib said. "I believe the dressing room will feel a lot better. The defeat to Scotland was definitely disappointing, but they played well. Like Oman did today. We had to work hard to come back into the game. I think Saifuddin and Mahedi bowled really well. Their spells were the turning point of this win. I think they didn't even concede 30 runs in their eight overs, which really helped us. Credit to both for their bowling."

Shakib said that they only need to make slight adjustments in the first six and last five overs for a better score in this competition. "I think we have room for improving by 20 to 25 runs. We can score 15 runs more in the powerplay, and an additional 10 runs in the last five overs, we can get this done.

"I think we are capable of improving on this, but we shouldn't be too worried by it. If we get these extra runs, we can defend a 170-plus score," he said.

The performance of Oman and Scotland against Bangladesh also caught Shakib's eyes, who said that there should be far more respect for Associate Nations.

"I have to give a lot of credit to Associate countries for the way they manage to play cricket despite adversities. They played good cricket.

"There's a lot more expectations from us as a Test-playing country. We try to win but its not always possible. When we beat bigger teams, they probably feel this way. That's cricket for you."

Foreign players not available for IPL till April 15 due...

Pakistan eye a hat-trick of wins, but in-form Afghanistan...

Afghanistan, with their fabulous net run rate, will replace Pakistan at the top...

Australian to play primarily as a batter, and is expected to be with the club for...

Join us for updates, analysis and colour from the third day of the fourth Test

Maxwell and Cummins the difference as Australia take series

Aaron Finch fell just sort of a hat-trick of hundreds before a limp batting display...

Australia's next superstar? Get to know Cameron Green

A first-class batting of average of 55 and bowling average 21 - the Western Australia...

Sumit Nagal: It's really sad nobody is coming up to invest...

Tennis: He spoke about lack of sponsors despite doing well

BCCI approves 10-team IPL from 2022 at AGM in Ahmedabad

Victoria cleared to travel to NSW for domestic fixtures...

The squad will be permitted to train and play, while otherwise abiding by the current...