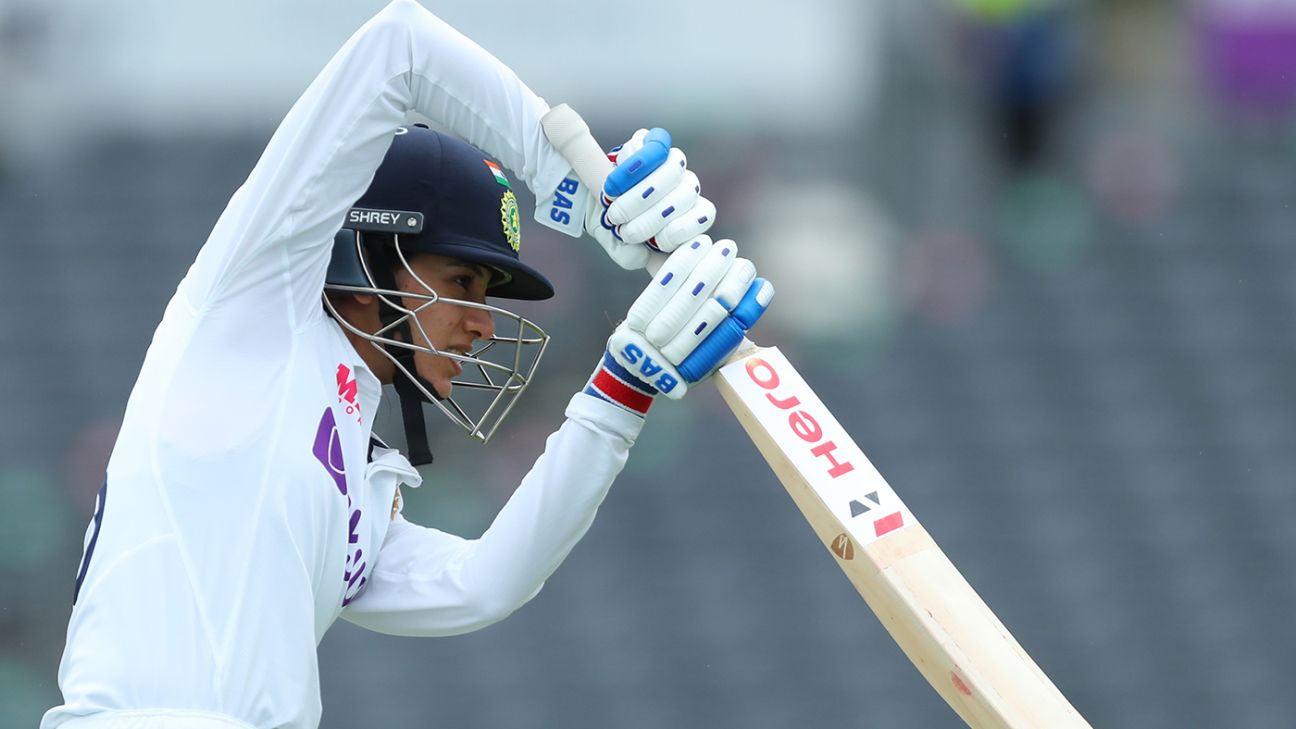 India batter believes that more opportunities to play Tests can help cultivate a better understanding regarding approaching the closing stages of each session in a day's play.

Mandhana's views came after stumps on the rain-affected third day of India's one-off Test against England in Bristol, where she fell for 8 in her second innings on the stroke of lunch, with her side following on after being bowled out for 231.

In her first innings, Mandhana made 78 before her wicket became part of a collapse that started late in the final session of the second day, as India slipped from 167 for 0 to 183 for 5 - in all they lost all 10 wickets for 64. On the opening day, England, too, had suffered a collapse after tea losing 4 for 21 before the close.

"I think that will just be an excuse to give," Mandhana said when asked about the trend around a flurry of dismissals coming about towards the end of sessions in the match. "But we can consider for sure that we aren't used to batting beyond 50 overs that much. But I wouldn't say I got out because of lack of experience in Test matches because I threw my wicket away in the last session of yesterday.

"But, definitely, I think a slight pressure of ending the day being not out, that might play a bit of a part [in the loss of wickets in a heap] and that will come with experience. The more we play Test matches, the more we'll get used to the conditions - one over before lunch or one over before the day's end and all those sessions, so we can be more mature about [approaching them] and not take pressure."

Mandhana's half-century in the first innings was pivotal to India putting on their highest opening stand in the format in response to England's 396 for 9 declared. Ninety-six runs in that record 167-run opening tally came from 17-year-old debutant . On the penultimate day of the Test - the standard length of women's Tests is four days - Verma got India off to a brisk start in their second innings, having fallen 15 shy of their follow-on mark.

After Mandhana's dismissal, Verma pressed on to bring up her fifty off just 63 balls. In doing so, she became the first Indian, and the youngest player from any country, to make half-centuries in both innings on Test debut in women's cricket.

"It's quite impressive to watch her bat from the other end," Mandhana said of Verma, who is also her designated opener partner in T20Is. "I think we both are very similar [in our approach] to keep things simple, so we don't really discuss much about batting in the middle. The way she changed her game and the kind of maturity she showed at this stage of her career, it's very positive for Indian cricket going forward. Her shots, in T20Is I've always watched them from the other end. It's amazing what she does. I hope she keeps going the way she is."

Mandhana, who had played only two Tests before, made her debut in the format at age 17, . In the India XI for the Bristol Test, she is one of the six players with prior Test experience. On Friday, she praised the performances of India's five debutants - Taniya Bhatia, Deepti Sharma, Pooja Vastrakar, Sneh Rana, and Verma.

Mandhana got off the mark in her second innings with a cracking punch off fast bowler Katherine Brunt that went for four through backward point. But her 13-ball stay ended in the fifth over when she edged a wide, fullish delivery from the same bowler to be caught by Natalie Sciver at second slip.

"Really disappointed," she said when asked to review how the day had ended for India, on 83 for 1, forced into early stumps due to rain. "But, of course, before the game stopped, before lunch, I got out, so definitely disappointed.

"I would have loved to stay there and come back fresh tomorrow to bat again, but that's what the day's cricket is, so we'll take it. But Shafali and Deepti stitched in a good partnership at the end, so I think at the end we were in a good position."

"The conditions changed slightly [on day three]," she said. "It was just windy, but it wasn't swinging that much that it was not playable or something. It was good conditions to bat on still even if conditions were cloudy or overcast.

"We just needed to take a few minutes initially. Of course, I lost my wicket, but I wouldn't say that it was a very good ball. I think I gave away my wicket because it wasn't that great a ball."

On the ICC's table: Future of ODIs, more teams in WTC,...

Daniil Medvedev doesn't plan to have the same diet as Novak...

I'm not thinking about the World Cup - Shoaib Malik

He is still enjoying his cricket and expects Bangladesh to provide tough competition...

Tennis - Struggling with a pelvic injury, Andy has been sidelined since the Davis...