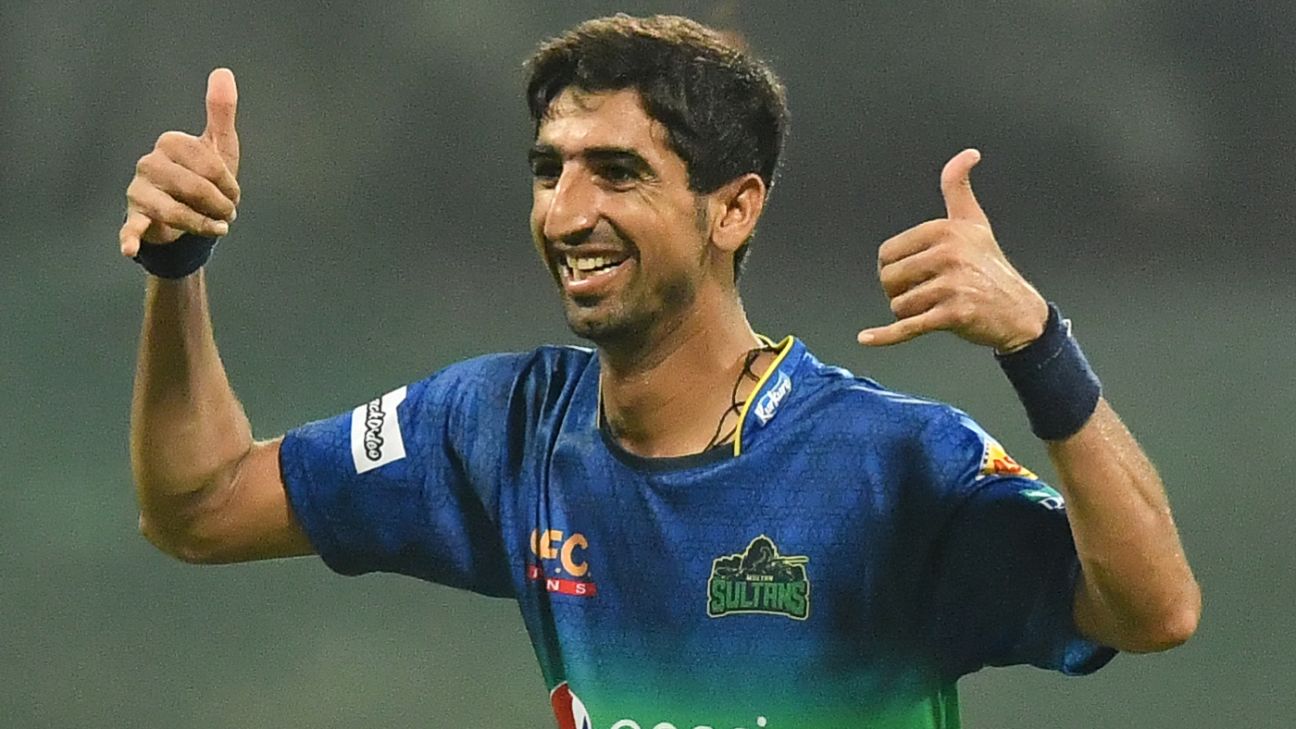 There's been plenty of talk about when the world will get back to normal, but Lahore Qalandars look like they're there anyway. A vintage capitulation from a side for whom qualification to the semis once looked a mere formality means their chances for progression hang in the balance. Multan Sultans swatted them aside by 80 runs, with Sohail Akhtar's side bowled out inside 15.1 overs for 89, which - aside from the points going to the Sultans - has produced a devastating blow to the Qalandars net run rate that they could ill afford to absorb. was the architect of the huge win, taking four wickets once again in the face of listless opposition from Qalandars.
Having lost three on the bounce when failing to chase down targets, Qalandars' decision to put Sultans in first was curious, but the bowlers kept them on a leash for much of the innings. Aside from a menacing 63-run partnership between Rilee Rossouw and - whose 40-ball 60 was redolent of his best days as a T20 power hitter - Sultans were never truly able to pull away. And once that partnership was broken, Shaheen Afridi and James Faulkner helped Qalandars run riot, ripping through the lower-middle order to leave Quetta hovering around 140. Only a destructive - in every sense of the word - final over from Haris Rauf, from which Sohail Tanvir plundered 24, helped Sultans set Qalandars 170 to win.

Given their chasing struggles in this leg of the tournament, that was always going to be an uphill task. Ben Dunk was promoted, signalling a shift in approach. But the experiment failed before Dhani, sensational once again, got some extra bounce to prise out a struggling Fakhar Zaman. Blessing Muzarabani got in on the act as Mohammad Hafeez fell thanks to a loose shot. Imran Tahir joined the party too, and aside from one big over courtesy Faulkner, the chase was never really on. When he was dismissed, the fight left the Qalandars. At this rate, the Qalandars might be leaving Abu Dhabi soon enough.

Shahnawaz Dhani's special relationship with the PSL shows no signs of cooling, his dizzying figures of 3.1-1-5-4 the zenith of an already glittering tournament. The signs of a remarkable day presented themselves the very first time he bowled, nailing Fakhar Zaman with a bouncer off his first ball and putting Qalandars on the back foot straightaway. When he returned in the middle overs, he got rid of the last dregs of Qalandars' hope, extra bounce putting paid to Faulkner's enterprising little stay. All that remained was the snuffing of the tail, and in this sort of mood, he accomplished that with disdainful ease.

It's easy to forget what a seemingly impregnable position Lahore found themselves in 19 overs into the match. Sultans had hobbled along to 145, and Tanvir kept the strike off the final ball of the previous over, hoping to get a few big hits in. It began with a couple of streaky fours, before a hammer blow over square leg for six saw the momentum shift ominously away from the struggling Qalandars. Assisted by supremely ordinary bowling, Tanvir - who has struggled for runs this PSL - managed another ten off the last two, wrenching the momentum back to his side. While Lahore had conceded just 26 off the five overs prior, Sultans plundered 24 more in just one. Lahore would never quite recover.

Lahore Qalandars are joined by Multan Sultans on ten points and both teams have one match to play. Sultans have the best net run rate in the tournament and barring a historically catastrophic loss to Islamabad United, Sultans are assured of a playoff spot. Meanwhile, Qalandars' fate rests in the hands of Quetta Gladiators. If the last place Gladiators can beat Karachi Kings, then Qalandars will take the final playoff berth. However, a win for the Kings and they'll move to ten points but will be in the playoffs ahead of Qalandars due to a superior net run rate.

Danyal Rasool is a sub-editor at ESPNcricinfo. @Danny61000

Start of Pakistan's tour to England delayed to make room...

Namibia back in playoff contention after big win

Gustavo Kuerten recalls when he upset Roger Federer at...

In an interview the former world No. 1 Gustavo Kuerten drew his perfect tennis player...

Serena Williams' coach shares why the American is still...

Andy Flower: Mohammad Rizwan 'has the qualities to make...

Multan Sultans coach backs the decision to change captains just days out from the...

Namaste in, high-fives out for post-virus cricket: Rahane

Namaste in, high-fives out for post-virus cricket: Rahane

The U.S. rode a pair of Daryl Dike goals to an easy win over Martinique to book...

'Without Roger Federer, Nadal and Djokovic, there is...',...

U-20 World Cup already under way for volunteers