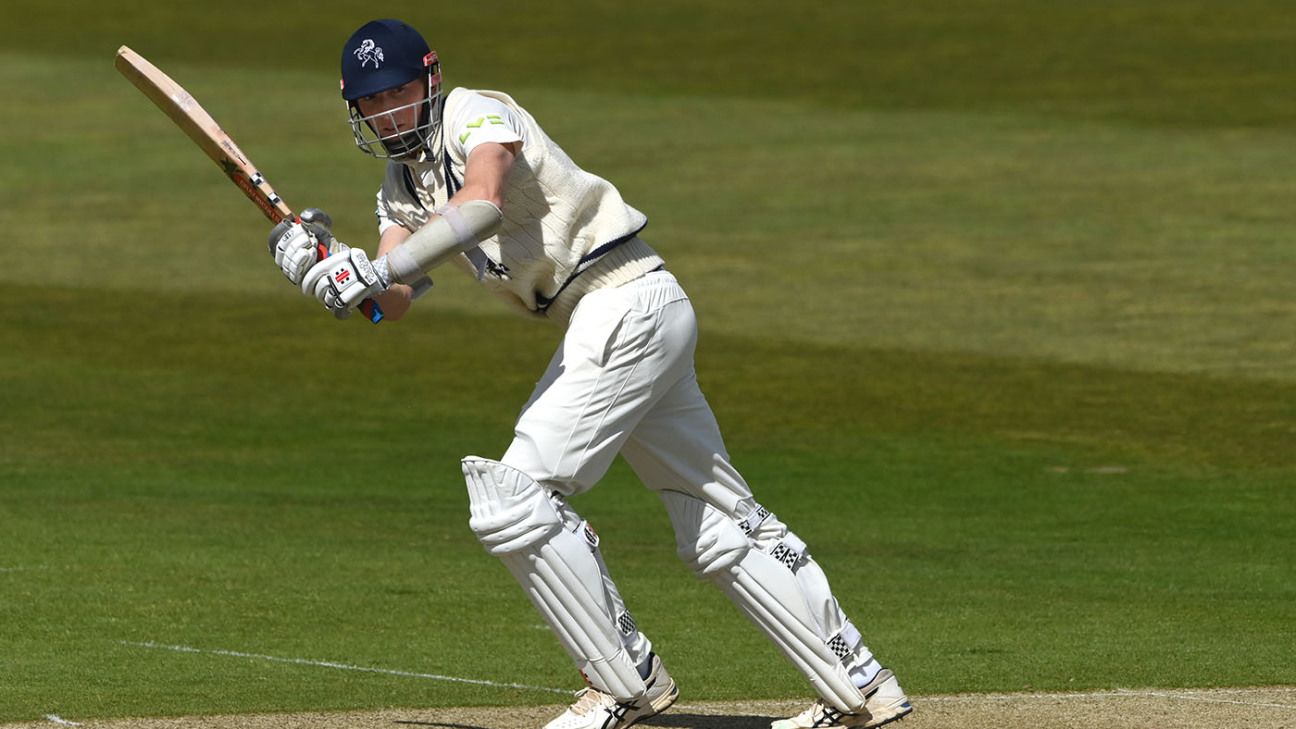 's batting recalls a more leisured age. One can imagine Neville Cardus rhapsodising his finest drives as 'noble' and 'patrician' or RC Robertson-Glasgow musing whether a cricketer possessed of such natural grace should have someone on hand, a valet of some sort, to run between the wickets for him. Such impressions are both true and unfair: true because Crawley's strokeplay invites them, and unfair because the Kent and England batsman is a modern professional cricketer whose innings of 90 on the first day of this match contained as much technique as art. But, of course, it is the art that lingers in the mind…

One's other reflections are probably even less suited to our obsessively egalitarian times. For 23-year-old Crawley is an old-school batsman and a typical product of Tonbridge, his old school. To mention that early cricketing education neither venerates nor excoriates privilege. It merely suggests that the certainty and poise with which he cover-drove Duanne Olivier or forced through the off side recalled another Old Tonbridgian, Colin Cowdrey. Crawley is plainly a very different batsman from Cowdrey - he is assuredly a different shape - yet his best strokes offer spectators similar joys and one recalled Ed Smith, the former national selector, saying that until he played at Lord's the best wicket on which he had batted was The Head at Tonbridge.

Of course no school can inculcate professional discipline and nous; that is the county coaches' job and Crawley's mentors at Kent will no doubt have been as irritated as the batsman himself when he followed a Kodak square cut off Steve Patterson with the hesitant push at his next ball that merely miscued a thick-edged catch to Joe Root, at short cover. That wicket ended his 79-run stand with Jack Leaning and it was also the prelude to the further wastefulness that spoiled what had promised to be a particularly good day for Kent after they had been asked to bat first and had been lowered to 65 to 3.

And even if some of Crawley's strokes recalled golden eras and good chaps, his reaction to his dismissal reveals only an ambitious young man, one who is still making his way in a hard world. "I have high standards for myself, and I've definitely been below those so far this year," he said "I feel like I played well, but I was angry when I got out. I didn't even want a hundred. I wanted a lot more than that."

Leaning was joined by Ollie Robinson with whom he put on another 63 runs, thus taking the visitors to 206 for 4. However, having shepherded Kent's innings to within two overs the new ball the former Yorkshire batsman attempted a wild drive at a wide ball from Harry Brook. Adam Lyth duly took his third catch of the day and Leaning departed for 47, comfortably his best score in seven innings since the first match of the season against Northamptonshire. Given these travails and his pair against Yorkshire at Canterbury, his application was impressive - it had taken him 29 balls to get off the mark - and that only made the manner and timing of his dismissal all the more disappointing.

Yorkshire's bowlers were to receive a further gift when Robinson, having stroked an attractive 38 off 71 balls, clipped Coad's new ball straight to Jordan Thompson at midwicket, and Darren Stevens' edge behind off the same bowler in the next over meant Kent ended the day on 224 for 7. This was hardly the harrying Patterson had envisaged when he won the toss but better than he might have feared when Crawley and Leaning were batting well.

The day went deceptively well for Yorkshire, whose players are developing the knack of having the best of sessions and games even when their cricket does not appear startling. Both the skipper and the highly-regarded Thompson had bowled tightly on a wicket where the ball rarely misbehaved but it was Coad whose figures of 3 for 45 look the best of the day.

Patterson had been able to keep two or three slips in place throughout the sessions and they had stood with their hands in their pockets, hoping the ball would come to them while fearing it might do so at finger-breaking velocity. Three times in the morning session it did so and on each occasion the fielders made no mistake.

Indeed, the signs had looked grim for Kent when Daniel Bell-Drummond edged Coad's sixth ball of the match to Brook, and even more so when both Jordan Cox and Joe Denly nicked catches to Lyth at slip. Although Cox could have got further forward and Denly was playing too far from his body, one could have concluded that Kent had been reduced to 65 for 3 without batting very badly. Cox's four fours of Duanne Olivier had promised more and Crawley's gunshot straight drive off Coad in the seventh over was the shot of the morning, if not the day. And yes, it is such art that lingers in the mind.

Paul Edwards is a freelance cricket writer. He has written for the Times, ESPNcricinfo, Wisden, Southport Visiter and other publications

CSA asks ICC to intervene after Australia's decision to...